Dr. Edward Root Gets Sworn In as a School Board Member 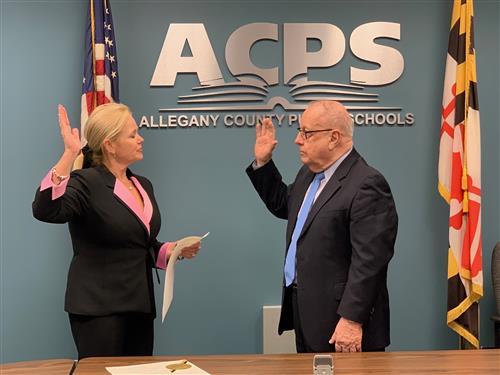 Dr. Edward Root was recently appointed by the Governor of Maryland, Larry Hogan, to fill a vacancy on the Allegany County Board of Education, and on Wednesday, December 4, 2019, he was sworn into office by Allegany County Clerk of the Circuit Court, Dawne Lindsey.

Dr. Root has more than 50 years of experience in the educational field and was previously elected to this school board where he served from 2011-2016. Dr. Root was also elected and served two terms on the Maryland State Board of Education from 1999-2007.

In 2003, Dr. Root was chosen Educational Leader of the Year by the University of Maryland. He also chaired the Athletics and Achievements in High School Commission for the National Association for State Boards of Education from 2002-2003.

Dr. Root is currently an adjunct professor at Frostburg State University, and he previously served as the University's Dean of the School of Education.