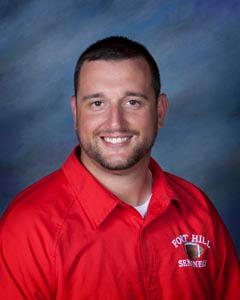 A selection committee comprised of both ACPS faculty and administrators and several community members have unanimously chosen Zach Alkire as the next head football coach at Fort Hill High School. Alkire will fill the vacancy left by Todd Appel’s recent resignation.

Zach is a 2002 graduate of Fort Hill and has been teaching social studies at the school since 2008. He is also no stranger to coaching athletics at Fort Hill. Alkire held the position of freshman football coach from 2008-2014 and then moved on to coach the JV team in 2015 until last season. Zach was also the assistant track coach for several years until he was named the head track coach in 2008 as well as the JV boys’ basketball coach from 2017 until the present.

“I feel honored to be the next head football coach at Fort Hill High School,” said Alkire. “The school has a long and storied tradition of excellence that I look forward to upholding.” He went on to say, “In regards to both players and coaches, there will be a great deal of youth and inexperience. I am sure there will be mistakes along the way. However, we learned from one of the best coaches, in Todd Appel, that the area and the State have ever had. I am confident that we can over come the obstacles ahead of us and continue the success that defines Fort Hill football.”

Fort Hill’s principal, Mrs. Candy Canan, is excited for Zach’s next step at Fort Hill. “Zach’s leadership and experience with the Fort Hill football program is evident. Beyond that, his passion for tradition, love for the athletes and the community, and pride in our school makes him the prime candidate for the job.” She continued, “I personally look forward to watching Coach Alkire’s leadership at Greenway with our team.”