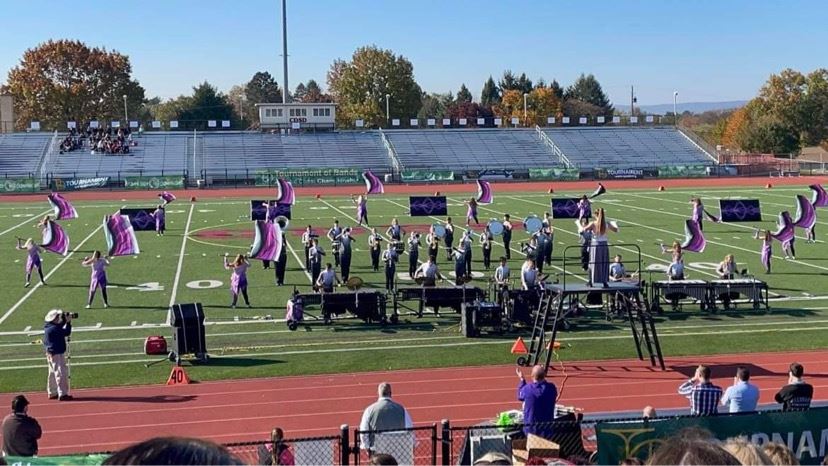 On Sunday, November 7, 2021, at Landis Field in Harrisburg, PA, the Allegany High School Marching Band made school history when they won their first ever Tournament of Bands Atlantic Coast High School Marching Band Championship (ACC's). Allegany led all Group 1 Open bands with a score of 96.50 and captured all of the caption awards: Best Music, Best Visual, Best Auxiliary (6th time), and Best Percussion.

“I’m just so proud of these kids,” said Allegany’s band director, Larry Jackson. “This was such a special group of kids, and I just love them all.” He went on to say, “They worked so hard, through rain and cold and wind, and they were champions to me regardless of how it ended, and they are deserving of every accolade.”

Allegany senior and drum major in the marching band, Genevieve Batman, said “I don’t think we could have done much better than our performance yesterday. It was a perfect run. Everyone just focused, and we had the best rep of our lives.”

Co-drum major and wind section leader in the band, senior Anna Martz, echoed these sentiments. “It was very nerve-wracking, but very exciting. We worked extremely hard all year, and everyone definitely kept pushing all season and just kept getting better all the time.”

Allegany High School principal, Heidi Laupert, traveled to Harrisburg with the band. “As I watched them, I just knew they won after the performance.  The diligence, time, and effort finally paid off with a first-place win, and this win is actually a testament to all of the members of the competition bands over Mr. Jackson's tenure at Allegany.” She went on to say, “Larry has truly built somewhat of a dynasty over the years at the ACC venue.  Allegany is always reputable in all areas - drum majors, percussion, guard, visual, and music categories.  Also, there has to be a shout out to Mr. Matt Stoops and his incredible talent with Allegany's Guard as well; they are simply flawless!”

The Allegany Band returned to the school on Sunday evening escorted by police and fire vehicles from Rocky Gap to a crowd of several hundred rousing and cheering fans, including Mrs. Laupert, Jeff Avey, ACPS Coordinator of Fine Arts, and Jeff Blank, Superintendent of Allegany County Public Schools. The band then played a standstill victory run of their Championship show, Gravity, in front of the school, to the great delight and appreciation of the crowd.

Jackson’s daughter, Lily, who is also a senior member of the band and played a flute solo in the ballad, was in awe of the community support the group received upon their return to Allegany late Sunday evening. “It was so awesome to see the community come together like that for us.” Batman felt the same way, “It was a very special moment, and I just can’t believe all these people came out to support us.”

“As I said to the students when they returned to Haystack Mountain Sunday evening - they simply took my breath away during that performance,” said Principal Laupert.

In its previous 24 ACC Open Class appearances, Allegany has finished 2nd five times; 3rd six times; placed in the top five 17 times; and scored above 90 in every appearance, never finishing below 10th. Allegany has also won ten Maryland State Championships in its Open Class between 1994 and 2004 and finished as the top scoring Maryland High School Marching Band for the fall marching season in eleven of the years since 2004.

For Kyle Wolford, senior member of the color guard, it still hasn’t set in yet that they are champions. “It still feels surreal, and it was so great to see everyone here for us when we got back.”

Allegany’s 2021 field show was entitled “Gravity” - gravity pulls us back to the people, activities, and things that we love. The program uses music composed by Phillip Glass, Elliott Goldenthal, Sara Barielles, and Carol Britton Chambers, and arranged by Chris Kellermeyer, Larry Jackson, and Mark Gauthier.

The kids say this win was for their leader, Mr. Jackson. “When we walked in there, we knew we were winning it for him,” said Martz.  “When we went on to the field before we performed, we yelled ‘FOR LARRY!’” Jackson’s daughter couldn’t agree more, “We’re one big family, and we worked so hard together for this. Mr. Jackson deserves everything.”

“It was just awesome,” Jackson said of his group’s performance. “They definitely saved their best performance for last, and it was just amazing to watch.”